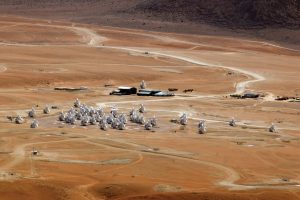 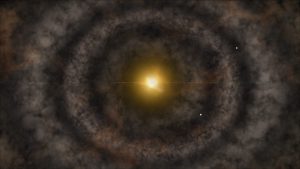 may be twins — in the sense that they came from the same parent cloud of star-forming material. Beyond that, however, they have shockingly little in common.

The main, central star of this system, which is located approximately 11,000 light-years from Earth, is truly colossal — a full 40 times more massive than the Sun. The other star, which ALMA recently discovered just beyond the central star’s disk, is a relatively puny one-eightieth (1/80) that mass.

Their striking difference in size suggests that they formed by following two very different paths. The more massive star took the more traditional route by collapsing under gravity out of a dense “core” of gas. The smaller one likely followed the road less traveled by – at least for stars – by accumulating mass from a portion of the disk that “fragmented” away as it matured, a process that may have more in common with the birth of gas-giant planets.

“Astronomers have known for a long time that most massive stars orbit one or more other stars as partners in a compact system, but how they got there has been a topic of conjecture,” said Crystal Brogan, an astronomer with the National Radio Astronomy Observatory (NRAO) in Charlottesville, Virginia, and a co-author on the study. “With ALMA, we now have evidence that the disk of gas and dust that encompasses and feeds a growing massive star also produces fragments at early stages that can form a secondary star.”

The main object, known as MM 1a, is a previously identified young massive star surrounded by a rotating disk of gas and dust. A faint protostellar companion to this object, MM 1b, was newly detected by ALMA just outside the MM 1a protoplanetary disk. The team believes this is one of the first examples of a fragmented disk to be detected around a massive young star.

“This ALMA observation opens new questions, such as ‘Does the secondary star also have a disk?’ and ‘How fast can the secondary star grow?’ The amazing thing about ALMA is that we have not yet used its full capabilities in this area, which will someday allow us to answer these new questions,” said co-author Todd Hunter, who is also with the NRAO in Charlottesville.

Stars form within large clouds of gas and dust in interstellar space. When these clouds collapse under gravity, they begin to rotate faster, forming a disk around them.

“In low-mass stars like our Sun, it is in these disks that planets can form,” said John Ilee, an astronomer at Leeds University in England and lead author on the study. “In this case, the star and disk we have observed are so massive that, rather than witnessing a planet forming in the disk, we are seeing another star being born.”

By observing the millimeter wavelength 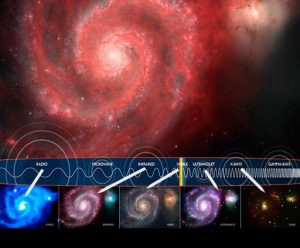 light naturally emitted by the dust, and subtle shifts in the frequency of light emitted by the gas, the researchers were able to calculate the mass of MM 1a and MM 1b.

Their work is published today in the Astrophysical Journal Letters.

“Many older massive stars are found with nearby companions,” added Ilee. “But binary stars are often very equal in mass, and so likely formed together as siblings. Finding a young binary system with a mass ratio of 80-to-1 is very unusual, and suggests an entirely different formation process for both objects.”

The favored formation process for MM 1b occurs in the outer regions of cold, massive disks. These “gravitationally unstable” disks are unable to hold themselves up against the pull of their own gravity, collapsing into one – or more – fragments.

The researchers note that newly discovered young star MM 1b could also be surrounded by its own circumstellar disk, which may have the potential to form planets of its own – but it will need to be quick.  “Stars as massive as MM 1a only live for around a million years before exploding as powerful supernovae, so while MM 1b may have the potential to form its own planetary system in the future, it won’t be around for long,” Ilee concluded.