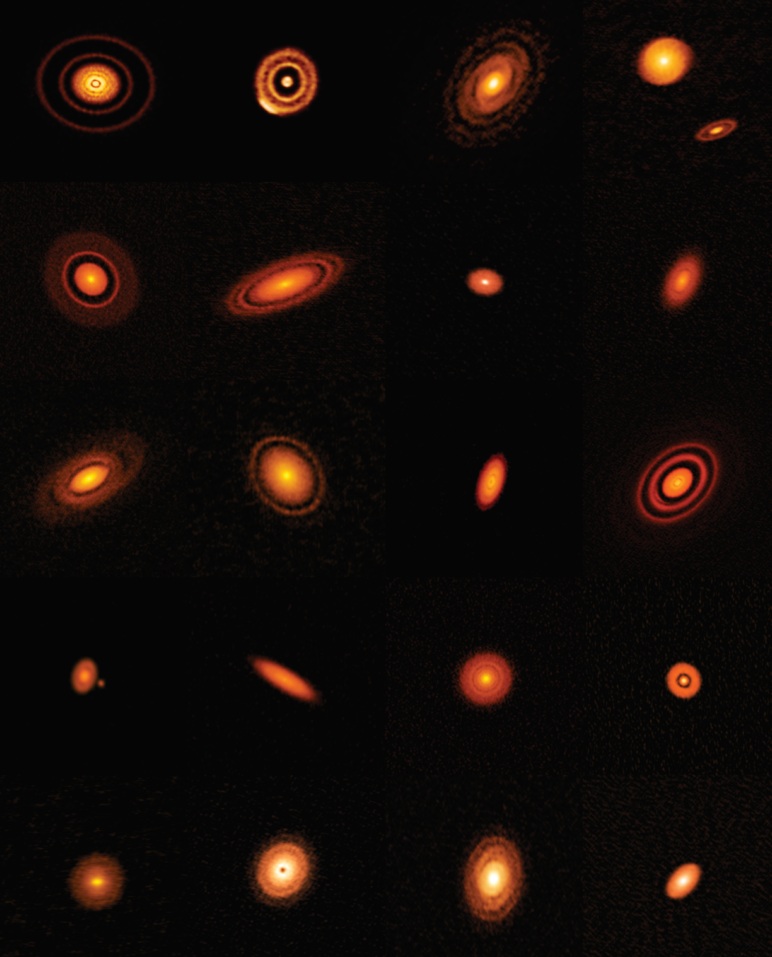 ALMA Campaign Provides Unprecedented Views of the Birth of Planets

Astronomers have cataloged nearly 4,000 exoplanets in orbit around distant stars. Though the discovery of these newfound worlds has taught us much, there is still a great deal we do not know about the birth of planets and the precise cosmic recipes that spawn the wide array of planetary bodies we have already uncovered, including so-called hot Jupiters, massive rocky worlds, icy dwarf planets, and – hopefully someday soon – distant analogs of Earth.

To help answer these and other intriguing questions, a team of astronomers has conducted ALMA‘s first large-scale, high-resolution survey of protoplanetary disks, the belts of dust and gas around young stars.

Known as the Disk Substructures at High Angular Resolution Project (DSHARP), this “Large Program” of the Atacama Large Millimeter/submillimeter Array (ALMA) has yielded stunning, high-resolution images of 20 nearby protoplanetary disks and given astronomers new insights into the variety of features they contain and the speed with which planets can emerge.

The results of this survey will appear in a special focus issue of the Astrophysical Journal Letters.

According to the researchers, the most compelling interpretation of these observations is that large planets, likely similar in size and composition to Neptune or Saturn, form quickly, much faster than current theory would allow. Such planets also tend to form in the outer reaches of their solar systems at tremendous distances from their host stars.

Such precocious formation could also help explain how rocky, Earth-size worlds are able to evolve and grow, surviving their presumed self-destructive adolescence.

“The goal of this months-long observing campaign was to search for structural commonalities and differences in protoplanetary disks. ALMA’s remarkably sharp vision has revealed previously unseen structures and unexpectedly complex patterns,” said Sean Andrews, an astronomer at the Harvard-Smithsonian Center for Astrophysics (CfA) and a leader of the ALMA observing campaign along with Andrea Isella of Rice University, Laura Pérez of the University of Chile, and Cornelis Dullemond of Heidelberg University. 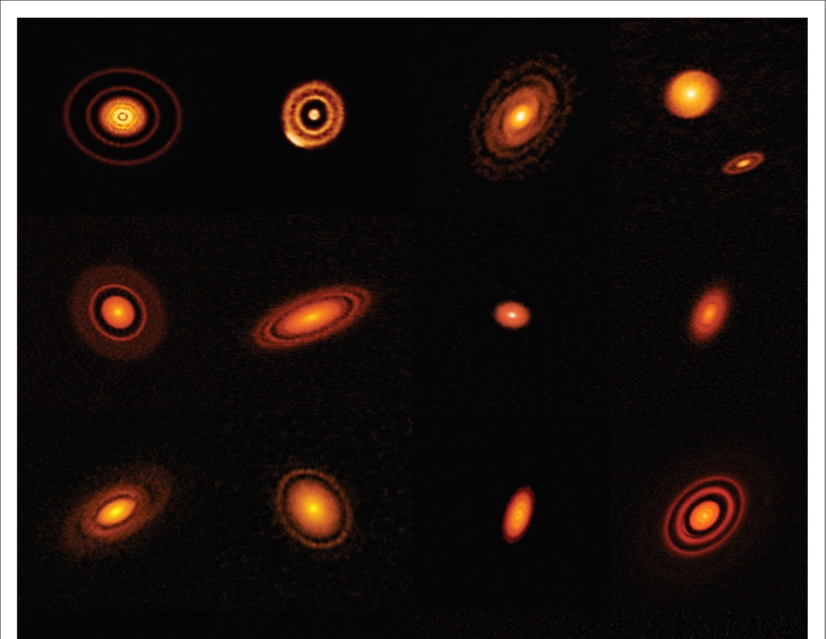 AS 209 is a star hosting a disk that is 1 million years old and located about 400 light-years from Earth. The ALMA image shows a tightly packed series of dusty rings in its inner disk and two additional thin bands of dust very far from the central star. – HD 143006 is about 5 million years old and resides 540 light-years from Earth. This star hosts a disk that shows wide gaps between dusty lanes that demarcate the inner and outer portions of the disk. A dense arc-shaped region, possibly heralding a concentration of material where comets or other icy bodies are forming, can be seen on the lower left portion of the outer ring. – ALMA reveals sweeping spiral arms in the dust disk orbiting IM Lup, a young star located about 515 light-years from Earth. These patterns may be the result of an unseen planetary companion perturbing the disk, or a global instability in the disk structure similar to those seen in spiral galaxies like the Milky Way. – AS 205 is a multiple star system, with each star sporting its own dusty disk. Since most stars in the Milky Way are multiples, this observation provides clues to the potential for planets in such systems. This system is located about 420 light-years from Earth.

The leading models for planet formation hold that planets are born by the gradual accumulation of dust and gas inside a protoplanetary disk, beginning with grains of icy dust that coalesce to form larger and larger rocks, until asteroids, planetesimals, and planets emerge. This hierarchical process should take many millions of years to unfold, suggesting that its impact on protoplanetary disks would be most prevalent in older, more mature systems. Mounting evidence, however, indicates that is not always the case.

ALMA’s early observations of young protoplanetary disks, some only about one million years old, reveal surprisingly well-defined structures, including prominent rings and gaps, which appear to be the hallmarks of planets. Astronomers were initially cautious to ascribe these features to the actions of planets since other natural process could be at play.

“It was surprising to see possible signatures of planet formation in the very first high-resolution images of young disks. It was important to find out whether these were anomalies or if those signatures were common in disks,” said Jane Huang, a graduate student at CfA and a member of the research team.

Since the initial sample of disks that astronomers could study was so small, however, it was impossible to draw any overarching conclusions. It could have been that astronomers were observing atypical systems. More observations on a variety of protoplanetary disks were needed to determine the most likely causes of the features they were seeing.

Depending on the star’s distance from Earth, ALMA was able to distinguish features as small as a few Astronomical Units. (An Astronomical Unit is the average distance of the Earth to the Sun – about 150 million kilometers, which is a useful scale for measuring distances on the scale of star systems). Using these observations, the researchers were able to image an entire population of nearby protoplanetary disks and study their AU-scale features.

The researchers found that many substructures – concentric gaps, narrow rings – are common to nearly all the disks, while large-scale spiral patterns and arc-like features are also present in some of the cases. Also, the disks and gaps are present at a wide range of distances from their host stars, from a few AU to more than 100 AU, which is more than three times the distance of Neptune from our Sun.

These features, which could be the imprint of large planets, may explain how rocky Earth-like planets are able to form and grow. For decades, astronomers have puzzled over a major hurdle in planet-formation theory: Once dusty bodies grow to a certain size – about one centimeter in diameter – the dynamics of a smooth protoplanetary disk would induce them to fall in on their host star, never acquiring the mass necessary to form planets like Mars, Venus, and Earth.

The dense rings of dust we now see with ALMA would produce a safe haven for rocky worlds to fully mature. Their higher densities and the concentration of dust particles would create perturbations in the disk, forming zones where planetesimals would have more time to grow into fully fledged planets.

“When ALMA truly revealed its capabilities with its iconic image of HL Tau, we had to wonder if that was an outlier since the disk was comparatively massive and young,” noted Laura Perez with the University of Chile and a member of the research team. “These latest observations show that, though striking, HL Tau is far from unusual and may actually represent the normal evolution of planets around young stars.”

This research is presented in the following papers accepted to the Astrophysical Journal Letters.